Posted by on November 8, 2012 in Cosmology, Dreams, Sleep Paralysis | 0 comments

In the first post, I shared the Bangungot nightmares surrounding my recurring sleep paralysis.  In this post, I’ll present a brief explanation and psychoanalysis of the dream.

The literal interpretation of dream events begins with the “boy staring into the eyes of God”.  He was a seraph of the Empyrean during the golden ages of bliss before The Fall , but he dissents against the order of Elysium is exiled by his Father and kin.   Left alone in isolation for a terrible age, he loses all desire for existence. Death refuses to end him.  Only the void embraces him, providing a measure of relief from his interminable suffering and loneliness. Now, in the subconscious mind of humanity, he is conjured; a fragmented shade of the child he once was.

The dream was probably influenced by my Torah studies prior to my Bar-mitzvah.   My Haftorah (after Torah which is one long reading that is sung) had an angel in it that spoke to the wife of Manoah, who was barren, and the angel told her that she would conceive a son who would begin the salvation of Israel from the Philistines.  The angel refused to reveal its name.  The child was Samson, from a very dark age of the Bible before the coming of Kind David (Judges XIII, 2-25).

Much of this story was imparted to me through pictures.  Since the age of five, I regularly attended the Metropolitan Museum of Art in New York.  In the dream, I was shown an impressionist painting of a boy in a garden that looked to have been by Renoir.  Others resembled the medieval wood block prints from the years of Black Death .  The image below is one I witnessed in the dream that I recreated from memory.  The boy explained to me that the creature on the bed is himself and that in the chest at the foot of the bed are the bodies of small furry animals from whom he had sought some small company, but inevitably, his very presence brought Death to them.

Near the end of the dream, I was transported into this scene and I was forced to look into the advancing darkness that invaded the upper right hand corner of the room.   I willed myself awake and opened my eyes, but was unable to move.  In the corner of my own room I saw clearly the boy, now transformed into the creature that I’ve since depicted in my drawings and sculpture. 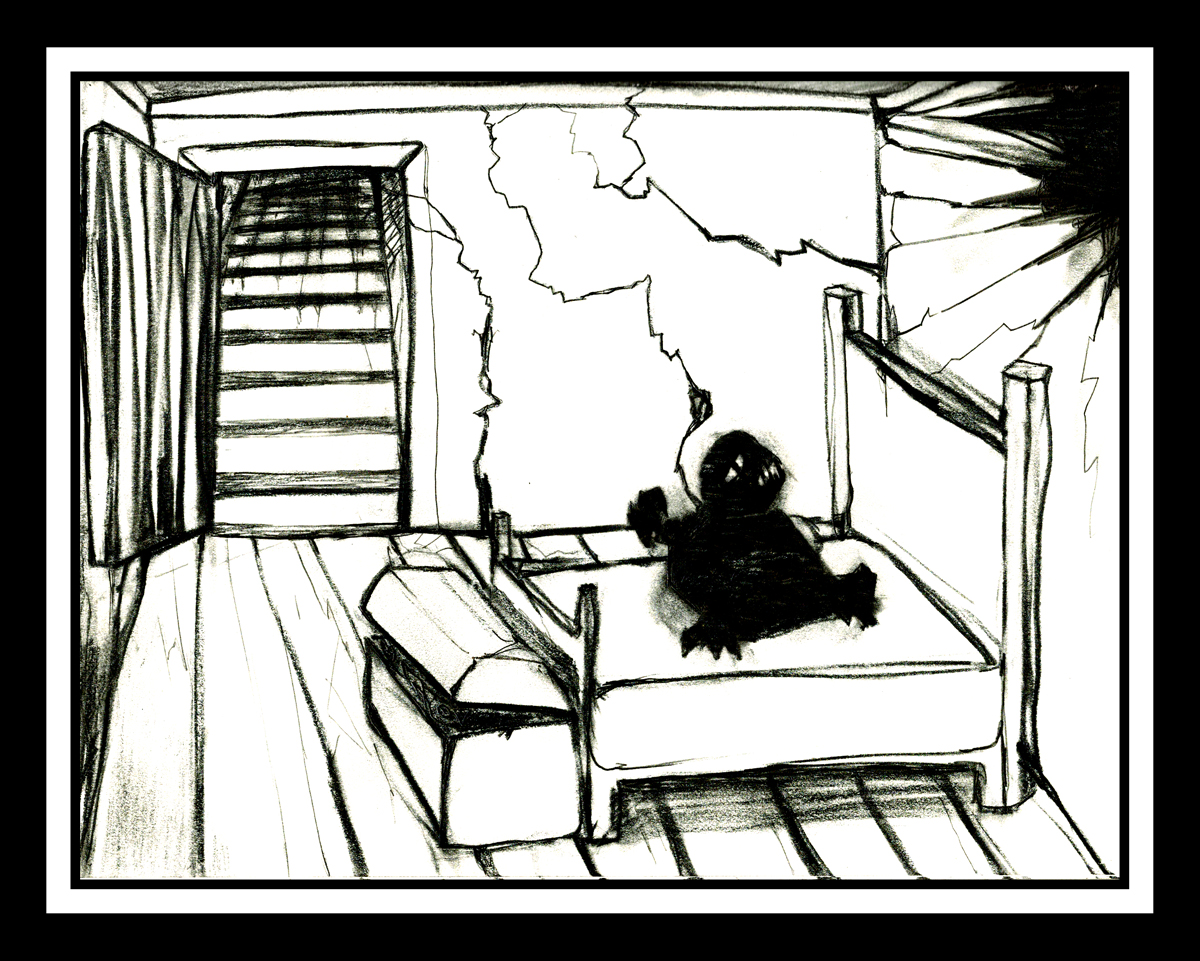 For years afterwards that same apparition appeared regularly to me during  hypnopompic states that I experienced recurrently throughout my teens and twenties. Often I would open my eyes and see it right in front of me, breathing on my face through a hole in its head. Other times I would wake up to hear its laughter while it clawed itself to pieces.  I found it fascinating that my semiconscious brain was generating this phantasm and I was even more preoccupied with the unusually vivid dream and its coherently sorrowful narrative describing its history of downfall.  I was also completely mesmerized by its anatomy; the way it manifested, and moved.  In dozens of drawings I attempted to capture the vision and sensation of its presence.