Sudden Unexpected Nocturnal Death Syndrome (SUNDS), the Bangungot, the Hmong and the CDC

Posted by on November 13, 2012 in Dreams, Sleep Paralysis, Uncategorized | 0 comments

This is a five-part series about SUNDS and Bangungot. The first two sections covered my own Bangungot dreams. This segment will go into the history of SUNDS, including the Center for Disease Control's studies of Hmong refugees that died suddenly in the night. When I went away to college, a graduate student in Asian studies identified my sketches as a pathology shared by many individuals of Eastern heritage, transliterations include: Bangungot (Phillipines), Dab Tsog (Laos), Lai Tai (Thailand), Pokkuri (Japan), Khyaak (Nepal), Gui Ya Chuang (China).

Posted by on November 8, 2012 in Cosmology, Dreams, Sleep Paralysis | 0 comments

Bangungot Dream Reconstruction Hover cursor over highlighted words see definitions – click to read about on Wikipedia In the first post, I shared the Bangungot nightmares surrounding my recurring sleep paralysis.  In this post, I’ll present a brief explanation and psychoanalysis of the dream. The literal interpretation of dream events begins with the “boy staring into the eyes of God”.  He was a seraph of the Empyrean during the golden ages of bliss before The Fall , but he dissents against the order of Elysium is exiled by... 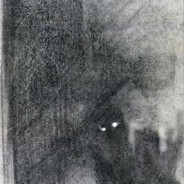 For years I was plagued by recurring hypnogogic dreams. I didn’t know at the time that there is a tradition of these dark nightmares in South Asian culture. It’s a well-documented occurrence that (mostly) men from Thailand, Singapore and the Philippines dream of a creature that suffocates them. Because many who experience this creature (called most often “Bangungot” but also and in other cultures: “Dab tsog,” “Lai Tai,” “Pokkuri”) die in their sleep (SUNDS or SADS), the nightmares are...

Posted by greenstone on August 18, 2012 in Cosmology, Sculpture | 0 comments 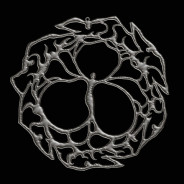 The Angelhead symbolizes a grand unified theological cosmology. All of my illustrations, paintings, sculpture, holography, writing and other art works emerge from this narrative. The 50,000 or so words of writing thus far are sourced from the Enûma Eliš, the Bardo Thodol, Pentateuchal literature, Greek Mythology, Occidental folklore, Oriental superstition and Inflationary Theory. 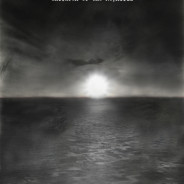 The Tears of the Nephilim is a post apocalyptic work of supernatural Gothic noir dystopia that we're posting as a graphic novel weekly on Facebook. It draws upon theology from the Tanakh, Book of Enoch, and books of Apocrypha surrounding the Nephilim; the offspring of angels who defected from the Empyrean to conceive offspring with humans. Their hybrid children were superhuman, supernatural and immortal.

Cŵn Annwn: the Generations of the Fall 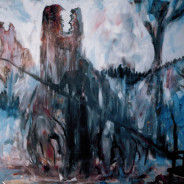 Once the great and noble hounds of Elysium, the Cŵn Annwn descended, evolving into the sepulchral prodigies of Tartarus. They are the 4th Generation of The Fall; twins conceived by their brother Death, in the raping of their mother and sister Sin, who by parthenogenesis was sired by the demiurge, Samael.

Posted by greenstone on August 7, 2012 in Sculpture | 0 comments 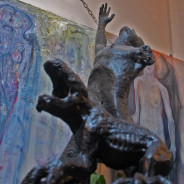 I explored 3D Printing (3DP) and rapid prototyping technologies, but found that these manufacturing processes were only available for plastics and other polymer synthetic materials.